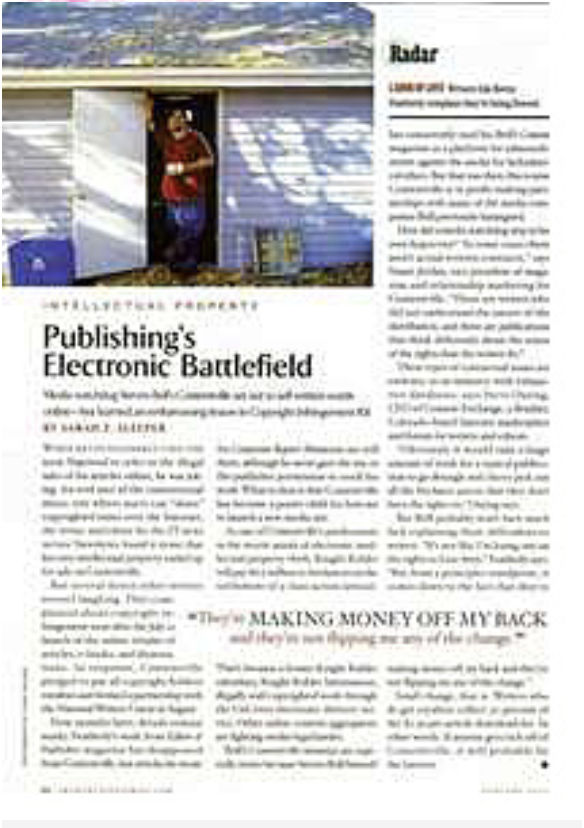 When Newsbytes writer and editor Kevin Featherly coined the phrase “Napstered” to refer to the illegal sales of his articles online, he was joking. An avid user of the controversial music site where users can “share” copyrighted tunes over the Internet, he found it ironic when he discovered his own intellectual property for sale on Contentville.

But several dozen other writers weren’t laughing. They complained about copyright infringement soon after the July 12 launch of the online retailer of articles, e-books, and dissertations. In response, Contentville pledged to pay all copyright holders royalties and formed a partnership with the National Writers Union (NWU) on August 3.

Now, months later, details remain murky. Featherly’s work from Editor & Publisher magazine has disappeared from Contentville, but articles he wrote for Corporate Report Minnesota are still there, although he never gave the site or the publisher permission to resell his work. What is clear is that Contentville has become a poster child for how not to launch a new media site.

As one of Contentville’s predecessors in the recent annals of electronic intellectual property theft, Knight Ridder will pay $65 million to freelancers in the settlement of a class-action lawsuit. That’s because a former Knight Ridder subsidiary, Knight-Ridder Information Inc., illegally sold copyrighted work through the UnCover electronic delivery service. Other online content aggregators are fighting similar legal battles.

Before the proliferation of online publishing, writers and editors often had handshake agreements. When no written contract is in place, the copyright is automatically retained by the writer, a precedent that was established in 2nd Circuit Court of Appeals last September. The case of Tasini v. The New York Times Co. was a sort of David-beats-Goliath win for freelance writers over publishing conglomerates.

Brill’s Contentville missteps are especially ironic because Steven Brill himself has consistently used his Brill’s Content magazine as a platform for admonishments against the press about the lackadaisical ethics. But that was then, and this is now. Contentville is a profit-making partnership with many of the media companies Brill previously harangued.

How did a media watchdog find himself in the midst of a media debacle? “In some cases there aren’t actual written contracts between the writers and the publications,” says Stuart Jordan, vice president of relationship marketing for Contentville. “In some cases there are writers who did not understand the nature of the distribution, and there are others where you have publications that think differently about the status of the rights than the writers do.”

These types of contractual issues are endemic in an industry with exhaustive databases, says Steve Outing, CEO of Boulder, Colo.-based Content Exchange, an Internet marketplace and forum for writers and editors.

“Obviously it would take a huge amount of work for a typical publication to go through and cherry pick out all the freelance pieces that they don’t have the rights to,” Outing says.

But Brill probably won’t have much luck explaining those difficulties to writers. “It’s not like I’m losing out on the rights to Love Story,” says Featherly. “But from a principle standpoint, it comes down to the fact that they’re making money off my back and they’re not flipping me any of the change.”

Small change, that is. Writers who do get royalties collect 30 percent of the $2.95 per article download fee. In other words: If anyone gets rich off of Contentville, it will probably be the lawyers.